To kick off the blog, I plan on starting by explaining my portfolio of project experience.  The first item in this portfolio, chronologically at least, is my senior thesis from Purdue.  This thesis, titled “Predictors of Well-Being in High Income, Industrialized Countries and Their Related Effects,” earned me the Alan Hess Award as one of the top two graduating seniors in Purdue’s economics program. I won’t go into too much detail about the motivation behind the thesis, but I will just say that I have long felt that GDP is not such an adequate measure of the health of a country as it’s often made out to be, and this thesis was a response to the search for alternative measures of progress.

Thankfully, there is a growing movement to promote alternatives to GDP (Such as: the Genuine Progress Indicator, the Human Development Index, the Ecological Footprint, The Happy Planet Index, and Gross National Happiness), and many before me have given this movement ammunition by studying well-being at both personal and national levels.  A good synopsis of the breadth of research on this topic can be found in Alois Stutzer and Bruno S. Frey’s report here. It has been pretty widely established by now that the relationship between per capita GDP and a country’s well-being (as measured by subjective surveys) is logarithmic, that is, countries see dramatic increases in well-being as GDP initially rises, but each further increase in GDP brings about progressively smaller increases in well-being.  This makes sense; a five dollar bill is worth less to a millionaire than a beggar. The following chart from Ronald Inglehart (simplistically) further illustrates this transition: that after basic needs are met through economic growth, individuals do not see as much gain in well-being from improvements in income and “Non-economic aspects of life become increasingly important influences on how long, and how well, people live.” 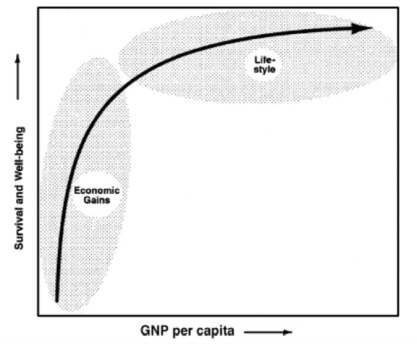 As a resident of a world where very few people have to worry about where their next meal is coming from, this economic-to-lifestyle transition feels very real to me.  Inglehart’s hypothesis seems true to my own life experiences, but I didn’t just want trust his word.   For my senior economics thesis, I decided to build upon this hypothesis and the research reviewed above, seeing what the data had to say to either confirm or deny what was instinctively true to me.

While I was slightly limited in terms of resources, my research was subject to critique by both my peers and superiors and, I believe, representative of the highest achievable academic quality at the undergraduate level. I began by analyzing whether there really was a difference between high and low-income countries in terms of what makes their citizens happiest.  Setting $8,500 in per capita GDP as the cutoff point between low and high-income, I found that there were indeed massive differences between the two groups.  The 5 most important variables for the collective well-being of a low-income country were:

2. Level of Freedom of Choice and Control

For High-Income Countries, the top 5 were:

3. Importance Given to Leisure Time

4. Level of Confidence in “the churches”

While subjective assessments of health and levels of materialism remained important in all countries, the other 3 variables for each group were markedly distinct from each other.  This result seemed to justify my decision to look more selectively at just high-income countries for analyzing national well-being, as most previous analyses had lumped all countries together for their tests. So what do these results mean, specifically for high-income countries?

I don’t want to draw incorrect conclusions about what the policy implications of these results should be, but I can perhaps shed some light on why these five factors stood out.  Firstly, it should be stated that there was a high amount of correlation between assessments of health and national well-being.  The significance of this variable was much higher than other health measures like life expectancy or healthcare expenditures, suggesting that it perhaps captures some of the inherent optimism in a country’s population that might skew results.  That being said, the remaining four variables stood out as significant after subjective health was accounted for.  Of these four, confidence in churches was the one that seems to make perhaps the least intuitive sense.  I’m not exactly sure why this factor, above all other available measures of relationships, corruption, or religious faith stood out the most; it could be somewhat of a measure of the strength of social institutions within a country, faith accompanied by community, trustworthiness of religious institutions, or a combination of all of these things.  Whatever the cause, I think it is an intriguing result that is worth not ignoring.  The exact wording of the question for this variable (answers coded numerically) was as follows:

I am going to name a number of organisations. For each one, could you tell me how much
confidence you have in them: is it a great deal of confidence, quite a lot of confidence, not very much confidence or none at all?
The churches

As I analyzed this subset of countries further, I explored many different questions and came away with two more observations that are worthy of sharing here. The first was that while increases in GDP do still result in increased well-being among high income countries, this effect is overshadowed by the more important 5 factors shown above. Furthermore, it almost entirely disappears when the decreases in unemployment and annual working hours that typically accompany GDP are taken into account.  This suggests that if we really want to increase our well-being as a country, we ought to decrease our average working hours per person, allowing for more leisure time and more employment.

The second observation had to do with our views on the government’s role in environmental protection.  It seems that there is a stark contrast between those who are willing to spend personal income for environmental protection and those who would like the government to do so.  Citizens willing to spend their personal incomes typically reside in less wealthy countries that place more emphasis on leisure time, while citizens encouraging their government to stop pollution typically reside in higher income countries with lower ecological footprints and less trust among the population.

What do you think this research should mean for our national and international policy priorities? Let me know your thoughts in the comments section below.

My full paper is available for download on my portfolio page.

One thought on “About the Portfolio: Predictors of Well-Being in High Income, Industrialized Countries and Their Related Effects”